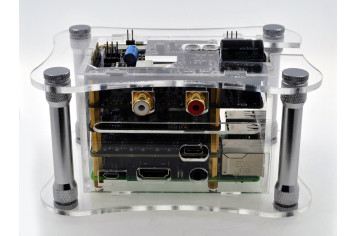 The story of the Katana ...

We asked ourselves how it's possible to bring true HIFI sound to the RPi. We wanted a price point that is accessible to everyone, while blowing away any DAC made by anyone under $1000. Let's see if we succeeded.

1. DAC IC
First we chose a very capable IC, the Ess9038q2m. This IC has excellent specs (theoretical THD+N at -120) and the analog stage (output) is left to the designer (more on analog stage below). One extra advantage of the Ess9038q2m is DOP. Of course, we used super caps and everything in audio path is film caps and thin film R.

2. Clocks
Any delta sigma IC is very sensitive to the clocks (jitter). We used the "ultra low jitter clocks from NDK NZ2520SDA. We also made sure that power was filtered by 2 LDOs in series along with a HF filter. Noise tested is in uV. Of course, we also used buffers (that also has its power filtered 3 times ...).

What we achieved is the lowest jitter ever (390fs).

3. Analog Stage
There are two kinds of analog stages: transfos and opamps. A lot of people swear by trans (with good reason), and others chose specific monolithic opamps. Still, the consensus is that transfos are better as far as sound quality (but very expensive and bulky), and that opamps are better as far as THD+N numbers. If opamps are used, the quality of the PSU (opamps need dual rail 15V) is very important.

Still, we felt that opamps CAN be better than transfos.

We concentrated a lot of efforts on this analog stage. You see, monolithic (integrated circuits) opamps suffer from the fact that not enough real estate is available on the silicon die. (Read an excellent article on this here)

So our choice was ultimately to build a discreet opamp (with IV stage we got 6 of them), while feeding it from a DC/DC convertor that has filters on input (+ LDO) and filters on output (+ LDOs), and of a course, a common mode choke (each rail has independent filtering) for a total noise that is lower than 1mV.

However, building an opamp is not a trivial task. What we did is partner with SparkosLabs.com and used his excellent design (thank you Andrew the wizard!). Read one review of those opamps here.

Each board is then hand-trimmed (individually) for DC offset (when board is warm to simulate conditions of a board that been running for at least 45 minutes), and then programmed for THD+N compensation.

So in essence, our Katana DAC is an excellent implementation of the Ess9038q2m in Master Mode (we are the first to do so), with a discreet stage made by 6 opamps running in class A amplification. THD+N numbers (1Khz, 0 dbfs, a weighted) at -112.75!!!

Katana gives you the choice between 2 stages:

"Pure THD+N": At -112.9 Thd+n 1Khz A weighted, this stage will satisfy those that want no distortion in music. Board sounds very good.

"Sound quality" stage: 100.5 Thd+n a weighted 1Khz, this board has been optimized for sound quality. While sacrificing some thd+n numbers we found the subjective experience to be, in a word, closer to analog sound.

The difference between the output stages depend on your system and your personal preference. Our preference is for “sound quality” output stage.